A couple of months ago, during a particularly busy period of work, I started to suffer some quite strange symptoms with my MacPro. Essentially, ‘sometimes’ if the system went to sleep, it was not possible to properly wake it up. It was apparent that the machine was starting up, but there was no video signal to either of the two monitors attached. One being an Apple 23 inch LCD. The other being an old CRT. The only way to get back to a working condition being to force-shutdown and restart the system.

My first suspect was one of the monitors – possibly the LCD. But trying them individually and swapping the connectors over made no difference.

The next suspect being the video card. Taking a look inside, there was a shocking amount of dust build up. I removed the card and gave it a good clean. Unfortunately this didn’t solve the problem. Over the next few weeks the occurrence increased in frequency to the point where one Sunday, after 7 or 8 reboots, it was time for more drastic action. 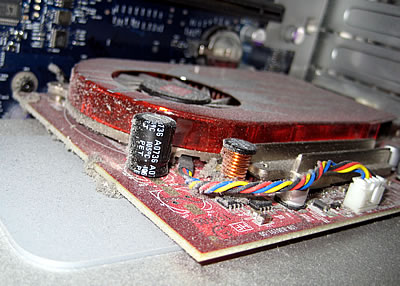 I had found a discussion on the Apple support site which echoed the symptoms and seemed to confirm the video card being at fault. My Mac was out of warranty and I needed it working for the next day and so trekked to the Regent Street Apple Store. Really busy store – the worse part was trying to get the attention of a member of staff. But then it was plain sailing. I explained the issue. While he suggested it might make sense to bring in the Mac to be checked – doing so would have been a real pain, run up cost and taken ages. I was pretty confident in my diagnosis. The only option available was an upgrade – which I was pretty happy with. From reading the rest of the support discussion I really didn’t want to replace like with like.

So, £300 lighter I trekked back home with a Apple Mini-DVI to DVI Adapter and a 512Mb ATI Radeon HD 4870. Very releived that the item was in-stock.

It dwarfs the old card, taking up two slots and full width. Installation was not too hard. The worst bit trying to connect the extra power cables to the mother-board.

Closed the machine and restarted. The new card was picked up immediately. No installation of drivers required. Note: I had been a little worried that drivers may be required as I had previously considered upgrading to  an NVIDIA® GeForce® GTX 285, for which I read that it was vital to install the drivers prior to installing the card. Something difficult to achieve if the old card is dead!

Summing up – very happy so far with the new ATI Radeon HD 4870 which has been running faultless for the last couple of months, and looking forward to more software making user of the GPU, particularly from the likes of Adobe.