Continuing the theme of occasional Flex Builder hints and tips…

Occasionally I need to see code printed on paper. Unfortunately the printing capabilities of Flex Builder, or more specifically in this case, Eclipse, are a bit messy…

Of course in the actual Print dialogue, you have the standard Mac ability to change the page layout, paper handling etc, and save that detail in a pre-set. However…

The key things I want to achieve is to print 2up full duplex black and white, which gives me four pages of code per sheet of A4, and with a slightly smaller font size I get a more respectable 68 lines of code per ‘page’.

However I’ve found the following approach, once set-up, a little more convenient, and becomes a one-click print…

The Mac has a GNU enscript installed which converts text files to PostScript to send directly to CUPS. In my case I had to update the old Gimp-Print drivers to the current Guten-Print drivers in order to achieve duplex printing.

More information on Guten-Print and access to the drivers on SourceForge. The DMG contains good documentation and a simple package installer.

Once the new drivers are installed, and I’d recommend a new, additional, print queue be set up with appropriate defaults for your code printing, you need to set Eclipse to run an external script to print the currently active code window. From the menu: Run > External Tools > External Tools…

Obviously you’ll need to tweak the arguments according to your personal print configuration. 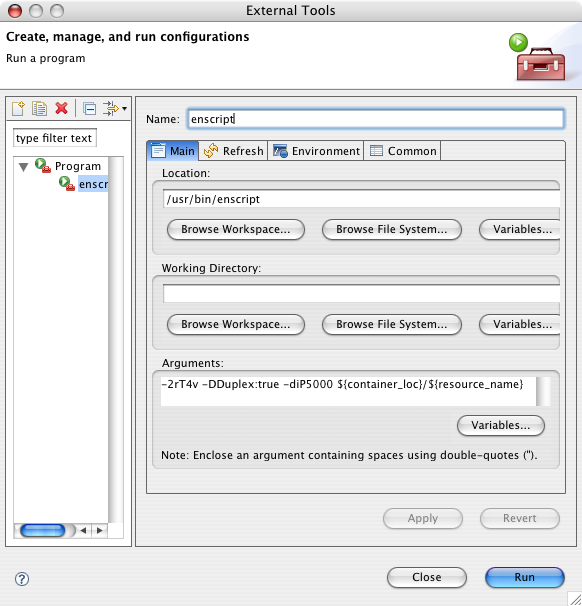 Kicking myself for not finding these sooner so, posting in line with the current trend of highlighting little Flex time-savers. Two ActionScript editor short-cuts (and probably apply to any Eclipse code editor?)…

1. Select some code in the ActionScript editor and press Option-Up or Option-Down, and the selected block of code gets moved accordingly. Or just place the cursor on a line if you only wish to move a single line. Saves a load of messing with Cut-Paste.

2. Need to duplicate a line? Place the cursor at the start of the line and press either CMD-Option-Up or CMD-Option-Down, and the current line (or selection if you have one) gets duped above or below the cursor respectively.

With either of the above, if you make a selection, you don’t need to be character accurate. The movement is applied either to the line touched by the cursor, or the lines touched by the selection. i.e. If you select part of a line, the whole of that line is included in the selection to be moved.

Ted Patrick has been quite prolific of late at publishing little productivity hints and tips. I think this one from a couple of weeks ago is worth echoing and noting the workaround for the problem it raises on a Mac.

We are setting up Builder to launch the help pages into an external browser. The key advantage of which being that the code samples can then be copy/pasted. On a Mac there is a recognised bug in eclipse that if you choose Firefox as the external browser, and it is NOT your normal system default browser. Basically Eclipse attempts to launch a second instance of Firefox which will generate the “Only one copy of Firefox can be open at a time” dialogue…

So to get around this, you have two options.

Option 1, if you have Firefox as your default browser for the entire system, simply choose “Default system Web browser” in the Eclipse preferences panel.

Option 2, if you want to keep something else set as your system default browser e.g. Safari, but would use Firefox for displaying Flex Builder help, you need to either edit or create a new external browser entry using a command structure as per comment 5 on the eclipse bug sheet. Essentially the following settings work… 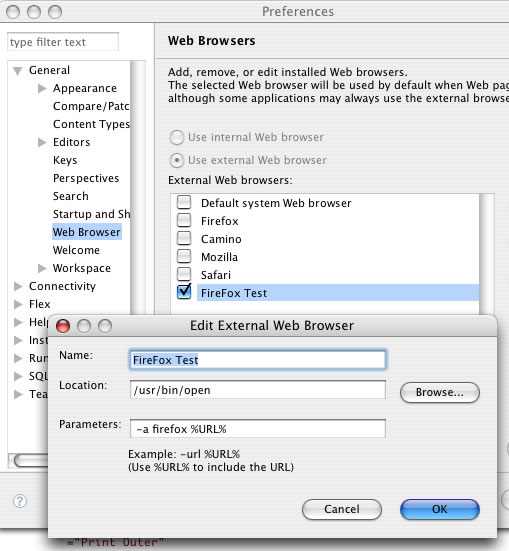 I had a scary first experience with the Flex Builder 2 (2.0.1) Trial on the Mac, after having commenced a project using the Beta…

Before installing, I was aware of the following bullet in the release notes…

So I zipped a back-up copy of my project files.

On installing and launching 2.0.1, I was suprised that my existing projects seemed to open ok. But ‘cleaning’ the project had the effect of removing the html files. Additionally seemingly spurious errors were generated on compile. The first being 1023: Incompatible override.

I keep my project files on a seperate disc away from the default location. So I deleted the folder and restored just my source files from a zip and recreated the project in builder 2.0.1 – still no joy. In-fact even creating a new application project with only the default stub resulted in errors reported at lines which didn’t exist. (Similar to these reported issues on Flexcoders).

I found the issue to be primarily that the 2.0.1 Builder looks for the same workspace files as the Beta – and they aren’t compatible. The solution…

Rename the existing “Flex Builder 2” folder to “Flex Builder 2 Beta” to accurately reflect the builder that created it. (Just to ensure you can revert to using the Beta if you need to – which I thought would be a likely prospect if my experiment failed) On the Mac:

(Note: for Flex Builder 2 Beta to pick up it’s workspace again, you need to choose “File>Switch workspace…” from the menu. Not that you’ll want to go back to the beta, once you have 2.0.1 running properly.)

Then when launching the 2.0.1 version, the “Flex Builder 2” folder will be re-created but this time containing a 2.0.1 compatible workspace. You can then start creating projects, porting your old source files as you see fit.

All the spurious errors are now cleared, and proper html files created. So far looking good with improved performance over the beta!